_
Question: What are energy vibrations?


Energy vibrations can be compared to the densities of different liquids on each other.

Think of it like, oil floats on water, water is denser than oil so it will always be underneath it.
Now, to have an idea on how the astral planes are like imagine an ocean filled with thousands of layers of oils and liquids with elemental and alien properties.

Question: How would you go about using energy vibrations to get past shields?

When noobs are shielded they tend to shield in one or two astral planes and the physical plane. You must learn that density comes over size at all times.
Here is an example to make a bit more sense before I go further in explaining this.

Let’s say the astral planes are oils and the physical plane is water.
If your enemy went to a really high vibration, higher then the ones your shields exist on then they can ignore your shields all together and go for your astral body, due to it existing in a huge range of planes.

Let’s say most of your shield is on the physical and on the closest higher and lower vibrational planes, and the physical plane would be point 0.

The denser you make it the more it seeps and bleeds into other realms.
Here is another example.
Water = energy
Paper= Astral Planes
If you drop water on a stack of papers and spread it around with your fingers, most of the water will be distributed and soak the paper on where it was applied to and if there is enough left after not capable of filling that slice of paper then it will seep into a few other layers depending on its quantity, but if you get a cup of water, put the stack of paper on top of it then quickly flip it while pressing the glass on the paper, the water will have to seep into deeper layers because it will be restricted from spreading rather then sinking into the other layers, but the deeper it goes, the more it will spread out while sinking. So to reach as many layers as you can, you have to keep the force AKA the glass on all planes so it only has the option of sinking after filling a certain width.

Question: Why does the energy body exist on so many planes?
Because it is extremely dense, from its soul energies, emotional energies, experience energies, focus energies, and general will.
That’s why if you have a strong will, you can usually Will constructs to not be constructs any more and the energy disperse and go neutral and ambient energy like.

Question: What is the difference between the soul and your astral body?
I believe that the soul and astral body are generally the same thing.
We and most astral entities do not have access to their own souls.
Our most active parts of ourselves are our physical bodies, that’s why it is absolutely hard to affect a person that is not aware to energy, because they have no focus on that body, so it would have to be extreme damage for them to feel anything and even then it would be blamed on a great many things.
That is what is true to most psions, they are aware of more astral bodies because they have more focus on other parts of themselves. No I am not saying we have billions of bodies, because we only have one. We are simply only aware of the ones our focuses are upon.
You need to do major practice and general focuses and activities to be more aware of the deeper denser parts of your body and to use those energies.

SO, essentially there is no difference, just the fact that you are not aware of it till you are quite advanced.

So as you advance into different layers of the astral plane you gain more access to energies of those other planes and bring them into different ones with the same power and density. You also gain more senses, a deeper and more complex mind, but it will always be something you are capable of understanding.
You may even gain memories if you happen to believe in past lives.
Continue to Introduction on culture force...

_Question: How far does the protection of a beginner's shield extend? 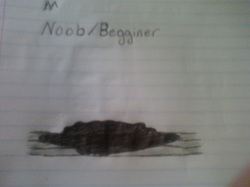 This is an example of the planes of existence the shield of the average beginner will exist within and flow into. This picture is not showing how the real shield would have looked, merely showing where its protection extends into.

The darkest blob is energy and the light grey rows are each a different plane of existance.
It is just to give you an idea. The real image would have rows of planes all around the blob and not always as neatly as it is shown.

As you can see. The beginner's energy is unevenly spread out and not concentrated and focused. So it would appear to be fuzzy and not too hard. If it is not focused and concentrated then it will not provide much protection on deeper or higher planes.


_Question: How far does the protection of a novice/moderate person of skill extend? 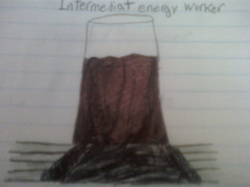 This is an example showing how your energy would seep into more planes via symbols of water, layers and a cup. The cup is the representative of a shield so it keeps your energy from going to places you wouldn't like. The layers are the different dimensions/planes of existence that your energy resides within.

As you can see this symbol is trying to show that the person shielded their energy and has directed a place as to where there energy will and will not flow. I 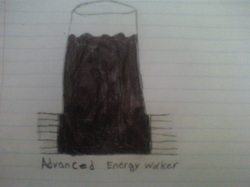 More will be added later...